Insights of a secretary cabin troll

After almost one year of wwoofing in Germany and Ireland it was also time for something new to do, something more serious, something closer to a possible future working field. So I put myself behind my laptop and one e-mail and two weeks later the question ' What next?' was answered. Essi's heartwarming and very  enthousiastic invitation to work for her as a volunteer from early May on got me immediately. Marine biology, field work at the northern Bothnian Bay, scuba diving and sidescan sonar were a lot of new, yet inexperienced things waiting there for me. After expecting to end up in the deepest Finnish forests or on the top of a fjäll, when you apply as a volunteer for Metsähallitus, the sea as a working field was a real surprise. It sounded very interesting though and rather challenging. So I took the chance and made my way by car from Ireland to Finland in the beginning of May. 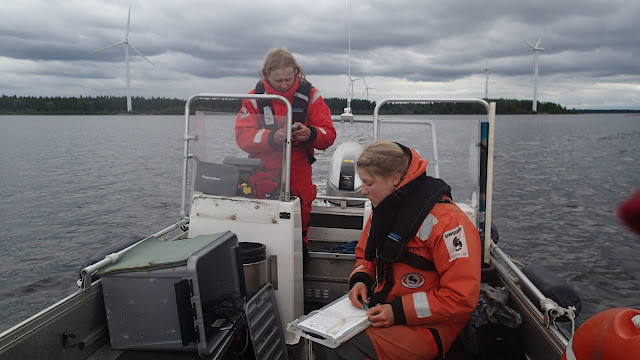 Using ferry connections between the British Islands and Scandinavia it seemed like a good attunement for the summer ahead. The winds let the ship dance on the waves and let my head and tummy spin. I didn't know yet, how much of a prophecy lay in this.

Arriving in Oulu I found Essi being exactly the heartwarming and care taking person I learned to know via e-mail before. She made everything possible and took care of making me feel as comfortable as possible - from providing her bike, a microwave, warm woolen socks and a water kettle up to invitations to private dinners with her friends. The start was very well done and I slowly settled into 'the Cave', also known as the new storage room. Maintenance was the first kind of work that waited for me and Alejandra, the second volunteer this summer. We moved all equipment from the old into the new storage room, prepared everything for the field season and went buying the funniest things from construction markets. Step by step we learned to know the female part of the team and got an idea of the kind of work that was waiting there for us.

Then the field season began... The first big project was named ' permanent transects'. It meant connecting a rope to various 100m-measuring tapes with cable ties. A few kilometers lay ahead of us and it seemed like a never ending story in the beginning. But this work turned out to be somehow fun and very meditative, even though my fingertips stayed kind of numb for at least two more weeks.

The next step started to become more challenging: putting these permanent transects down into the water. From the easier way of doing this job with the help of a boat to the more adventurous way of using a floating jetty, the transects attached to concrete weights could be situated in their places on the bottom of the sea. Everybody seemed to be happy like hell and enjoying this work very much. I enjoyed taking pictures of these activities but, that was that. I started wondering why I couldn't feel any joy while being in a boat. It felt rather wrong and somewhat weird but, these feelings immediately disappeared as soon as I went back ashore. A short period of time later, being in the boat Maia and taking videos, the diagnosis became clear: seasickness. How useful! But there was no choice nor alternative to changing my tasks, since even the side effects of the medicine put me to sleep. So we had to make a decision. Pretty fast Essi and me figured out what kind of jobs I could do instead. Luckily we are enough people for the boats and I could stay on solid grounds. 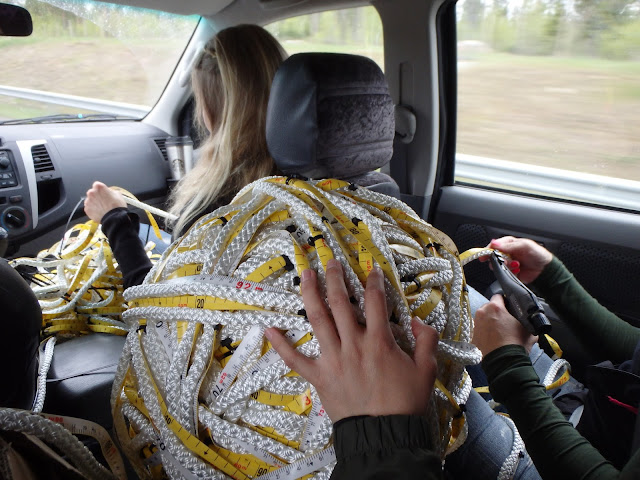 This way I became the housekeeping and secretary cabin troll who takes care of tidying up, cleaning the dishes, preparing the sauna and desserts (preferably pudding-creations). Besides ruling the GPS- data base, there are also piles and piles of dive logs, protocols, analyzing and video papers which need to be typed into excel sheets and thousand of pictures who needs to get organized for the VELMU photo project. Perfect! This is my job! And so I enjoy the days with Eppu, Jonna, Rauta-Reetta and Hilda (our electronical devises) and permanently new up-piling papers and numbers in peaceful quiet solitude. I am happy to be trusted with this detail-focused work and the rest of the team seems happy that they don't need to do it. If the numbers start to mix up, I just go and wash some dishes or take pictures of the beautiful surroundings to clear out my head. Doing these things in my rhythm and tempo is so great.

I think, this is how working in a team should be like. Everyone brings in his or her abilities and skills into the work and fills out a very particular nieche. It's like being an organ in an organism. Everyone is part of the whole and can't do all the jobs alone, just all the parts working together make the whole system successful and stay alive.